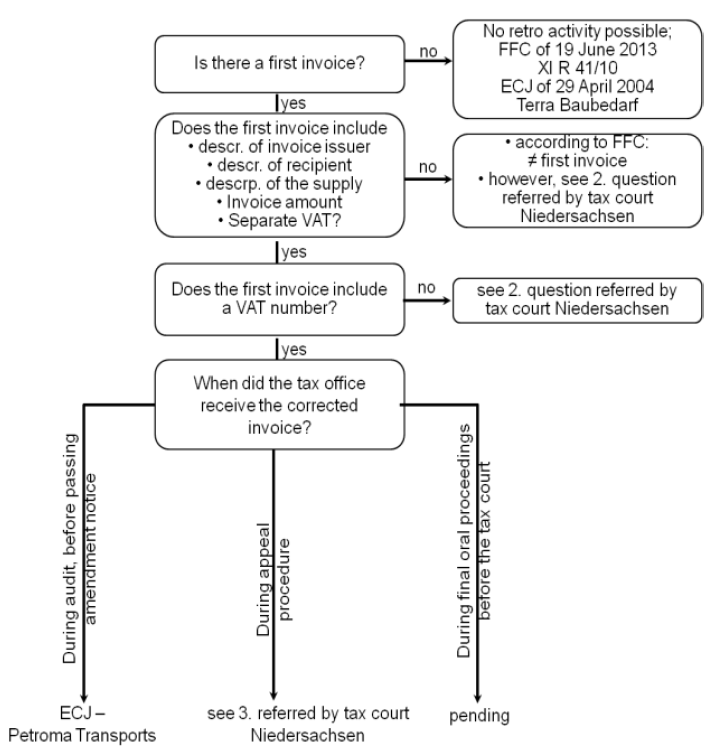 By decision of 3 July 2014, case no. 5 K 40/14, the tax court Niedersachsen presented the ECJ with the question as to whether and, if so how, the correction of invoices does have retroactive effect…

The tax court Niedersachsen referred to the ECJ the question of whether and, if so how, the correction of invoices can be carried out retroactively. If a VAT deduction is denied vis-à-vis the faulty invoice and is granted for the corrected invoice, it would be a “zero-sum game” if it were not for the additional late payment interest in the amount of 6%. However, interest payments would be omitted if a retroactive correction of the invoice was permitted.

By decision of 3 July 2014, case no. 5 K 40/14, the tax court Niedersachsen presented the ECJ with the question as to whether and, if so how, the correction of invoices does have retroactive effect. There can be no VAT deduction granted if there is no proper invoice. In this case, additional late payment interest, in the amount of 6%, are payable. However, interest payments would be omitted if a retroactive correction of the invoice was permitted.

An audit at a textile wholesaler queried the fact that, on some self-billing invoices, which serve as invoices, the VAT number of the supplier was missing. The textile wholesaler corrected the self-billing invoices during the course of the audit by adding the missing VAT number of the supplier. Nevertheless, the tax office did not allow the input VAT deduction on the grounds that the requirements for input VAT deduction were not fulfilled in the relevant years from 2009 to 2011. The tax office found that they were fulfilled only at the time the executed correction of the invoices occurred (in 2013).

2. Questions by the tax court Niedersachsen referred to the ECJ

The tax court Niedersachsen asked the ECJ to clarify the question of whether the findings, in legal case “Terra Baubedarf-Handel” (judgment of 29 April 2004 – legal case C-152/02), that input VAT deduction is only to be made at the time of issuing a proper invoice, may also be applicable in the case of adding missing information to the invoice or if retroactivity is permissible in such a case (see also the decisions by the ECJ regarding “Pannon Gép” and “Petroma Transports”, judgments of 15 July 2010 – legal case C-368/09 and of 8 May 2013 – legal case C-271/12).

If it is possible to correct invoices retroactively, the ECJ needs to clarify if there should be minimum requirements and, if so, what they should be regarding invoices that might be corrected retroactively. This is of particular importance in circumstances where the VAT number should have been stated in the previously issued original invoice.

It should also be determined whether the correction of the invoice is still made in good time if the corrections are being made during the appeal proceedings.

Incoming invoices should be examined to determine whether the necessary invoice information is stated.

If an audit determines an incoming invoice to be faulty, the recipient should obtain the corrected invoice as soon as possible.