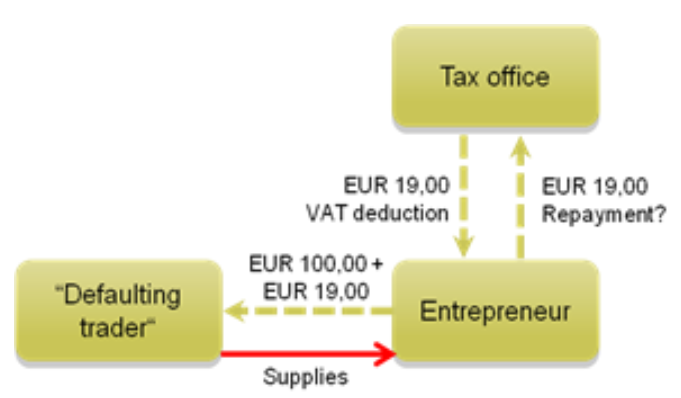 Decisions by the Federal Fiscal Court

The tax authorities often deny VAT deduction by saying the entrepreneur received the goods from a “defaulting trader”. Currently, the legal concept of good faith is of no importance in the assessment procedure. However, according to the latest decisions …

The tax authorities often deny VAT deduction by saying the entrepreneur received the goods from a “defaulting trader”. Currently, the legal concept of good faith is of no importance in the assessment procedure. However, according to the latest decisions by the Federal Fiscal Court, this might be viewed differently in the future. In tax disputes, the question as to who actually bears the burden of proof regarding good faith will need to be determined.

The Federal Fiscal Court denies a VAT deduction if the entrepreneur does not have a correct invoice. This means the entrepreneur concerned has to pay back deducted VAT amounts to the tax authorities. An invoice is not correct if, for example, the supplier states a false address or the wrong name on the invoice.

If the recipient has acted bona fide regarding such incorrect information, he might only be entitled to deduct VAT by means of a separate application for equitable relief. However, in such circumstances, the entrepreneur must wait a long time before he receives payment. Furthermore, an additional (but often missing) application for equitable relief is necessary in the appeal procedure. However, both VAT senates of the Federal Fiscal Code seem to be choosing not to follow this case law (Federal Fiscal Court, decision of 16 April 2014 – case no. V B 48/13 and decision of 26 September 2014 –case no. XI S 14/14).

An entrepreneur deducted VAT on purchase invoices from a supplier. The tax authorities subsequently reclaimed this VAT amount as the issuer of the invoice was said to be a “defaulting trader”. Claiming that there was an incorrect address stated on the invoice, the invoice was determined by the tax authorities to be false. For this reason, the requirements for VAT deduction were not met. The entrepreneur challenged this decision in court and applied for suspension of the operation of the recovery order. He argued that he could not have known that the address stated in the invoice was wrong.

3. Decisions by the Federal Fiscal Court

The Federal Fiscal Court granted suspension of the operation.

This decision was somewhat surprising as, according to the previous case law, the entrepreneur was not permitted to deduct VAT if the information stated in the invoice was incorrect. In this case, the invoice stated a false address. This would normally have meant that the recovery order was indeed legitimate.

Nevertheless, the Federal Fiscal Court considers it possible that entrepreneurs may be entitled to deduct VAT if they act in good faith and unknowingly place their trust in the faulty information provided by the supplier which ultimately proves to be incorrect.

In this regard, the Federal Fiscal Court refers to the latest ECJ case law, namely, Mahagebén and Dávid (C-80/11) and Maks Pen EOOD (C-18/13), as well as to the case law of other tax courts.

According to this case law, the entrepreneur may be entitled to deduct VAT even during the assessment procedure, although sec. 15 of the German VAT Act does not provide for the protection of good faith in order to fulfill the requirements of VAT deduction.

It would improve the situation of entrepreneurs considerably if the Federal Fiscal Court remains of the view that bona fide entrepreneurs may deduct VAT despite the requirements of sec. 15 of the German VAT Act not being met.

The tax authorities often deny VAT deductions as a result of a general indication of faulty information stated in the invoice. This situation obviously affects, among others, entrepreneurs who were tricked by the supplier or who are unknowingly part of a so-called carousel fraud.

For the time being, taxable persons involved in ongoing appeal procedures should attempt to obtain suspension of the proceedings by referring to the aforementioned Federal Fiscal Court decisions. Furthermore, it is advisable to apply for equitable relief.

Often questions regarding the burden of proof arise in these sorts of cases. Do the tax authorities need to prove that the address stated in the invoice is incorrect? Or does the entrepreneur need to prove the correctness of the address? This indicates a gradual turning away from the case law of the Federal Fiscal Court that was not previously so “business-friendly”.

This development of case law will bring the neutrality of VAT more into focus, offering honest entrepreneurs more protection.